The World-Rune-Clock, illustrating the correspondences between List’s Armanen runes, the signs of the zodiac and the gods of the months. A whole lot of well thought out bullshit.

There are lots of books, movies and even video games which like to play with the pairing of Nazis and the occult. And let’s be honest, who can resist Nazi zombie lichs? While more wild theories about this get into just plain ridiculousness, the fact remains there is some basis of truth to the connection.

Here is a brief summation:

Germany leading up to the Nazi takeoever was an incredibly wild and explosively creative hotbed of culture and ideas. We’ve talked about the famed Weimar Era in length. While all the artistic achievements were going on however, the far right was a strange nest of underground occult and political societies centering around a racist esoteric system called Ariosophy.

Ariosophy was a system of pseudo science and mythology disguised as religious history pioneered by Austrians Guido von List and later Jörg Lanz von Liebenfels between 1890 and 1930.

List was indeed influenced a great deal by Blavatksy and Theosophy, although it should be mentioned Theosophy was not racist in any of the ways List developed. Theosophy talks about root races of Man which evolve from bestial to angelic. List of course placed the Aryo-Germanic race as the higher evolution of Man.

“List called his doctrine Armanism after the Armanen, supposedly a body of priest-kings in the ancient Ario-Germanic nation. He claimed that this German name had been Latinized into the tribal name Herminones mentioned in Tacitus and that it actually meant the heirs of the sun-king: an estate of intellectuals who were organised into a priesthood called the Armanenschaft.

So the orginal Aryans as we can see are pretty twink-ish and really gay.

His conception of the original religion of the Germanic tribes was a form of sun worship, with its priest-kings as legendary rulers of ancient Germany. Religious instruction was imparted on two levels. The esoteric doctrine (Armanism) was concerned with the secret mysteries of thegnosis, reserved for the initiated elite, while the exoteric doctrine (Wotanism) took the form of popular myths intended for the lower social classes.

List believed that the transition from Wotanism to Christianity had proceeded smoothly under the direction of the skalds, so that native customs, festivals and names were preserved under a Christian veneer and only needed to be ‘decoded’ back into their heathen forms. This peaceful merging of the two religions had been disrupted by the forcible conversions under “bloody Charlemagne – the Slaughterer of the Saxons”. List claimed that the dominance of the Roman Catholic Church in Austria-Hungary constituted a continuing occupation of the Germanic tribes by the Roman empire, albeit now in a religious form, and a continuing persecution of the ancient religion of the Germanic peoples and Celts.

He also believed in the magical powers of the old runes. From 1891 onwards he claimed that heraldry was based on a system of encoded runes, so that heraldic devices conveyed a secret heritage in cryptic form. In April 1903, he submitted an article concerning the alleged Aryan proto-language to the Imperial Academy of Sciences in Vienna. Its highlight was a mystical and occult interpretation of the runic alphabet, which became the cornerstone of his ideology. Although the article was rejected by the academy, it would later be expanded by List and grew into his final masterpiece, a comprehensive treatment of his linguistic and historical theories published in 1914 as Die Ursprache der Ario-Germanen und ihre Mysteriensprache (The Proto-Language of the Aryo-Germans and their Mystery Language).”

In 1903 century an ex monk and Bible scholar named Jörg Lanz von Liebenfels published an articel where he used fossils, iconography and literature to argue that mankind was divided into two groups, one who had interbred with lower evolutionary forms, apes, and one who hadn’t (Aryan, surprise surprise). 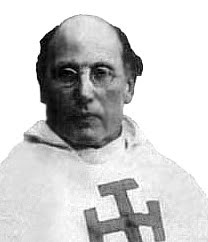 “He claimed that “Aryan” peoples originated from interstellar deities (termed Theozoa) who bred by electricity, while “lower” races were a result of interbreeding between humans and ape-men (or Anthropozoa). The effects of racial crossing caused the atrophy of paranormal powers inherited from the gods, but these could be restored by the selective breeding of pure Aryan lineages. The book relied on somewhat lurid sexual imagery, decrying the abuse of white women by ethnically inferior but sexually active men. Thus, Lanz advocated mass castration of racially “apelike” or otherwise “inferior” males”

In 1908 the Guido Von List Society formed, to study, publish and further List and Lanz’s Ariosophy ideas. The Society was founded by the prominent Wannieck family, and catered to and attracted a more high class membership which also included many leading figures in Austrian and German politics, publishing, and occultism. It also included two Jews.

By 1911 an inner circle was set up, the High Armanen Order, a magical order exploring Ariosophical ideas using occult rituals and techniques.

So Reichshammerbund met Ariosophy, fell in love and the hell baby their love spawned was the new Germanenordan group.

The Germanenordan’s version of The Watchtower. Philosophically maybe even dumber.

And, these damn 5 syllable names are driving me nuts too. Typing them is a serious bitch, but let’s not digress. This repellant lesson is almost over.

In September of 1919 a corporal in the German army was ordered to go to a DAP meeting and spy on what was going on. This corporal was of course Adolph Hitler, and the violent argument he got in that night impressed the hell out of DAP founder Anton Drexler. Drexler asked Hitler to join and as we all know Hitler did. Hitler became a  superstar within DAP and eventually Drexler grew to loath him and quit.

It is important to remember that all these far right secret societies and their racist occultism which hatched many of the ideas that would become the foundation of the Nazis were all disbanded in 1933. In 1933 when Hitler became Chancellor he disbanded all societies in Germany except Nazi ones. Thule: gone. Germanenordan: gone. All others: gone. It was expected all members would become Nazis.

However, the occult practices around Ariosophy did continue. In 1929 a young Heinrich Himmler ended up in charge of Hitler’s little bodygaurd squad. Himmler asked to make this protection force (known as SS) into a volunteer elite. Given the go ahead he transformed the SS into the immense, fearsome monster we all remember it as today. Himmler made it into a Nazi freemason group, which was rife with Ariosophical occultism and secret society like rituals and structures. The SS staff department contained three departments dedicated to research into Occult, pagan and Ariosophical subjects.

The most serious occult rituals were performed at a medieval castle in Westaphalia called Wewelsburg. It is from this that wild speculation and fanciful theories arise. While i personally believe in a healthy dose of skepticism, there is no doubt that there was an occult arm of Nazism, led by Himmler which was the child of the groups we’ve just taken a stroll through.

This picture is found in the dictionary illustrating the word Douchebaggery

And there you go. I’ve been waiting for some time to write this post, but dedicating myself to discussing Nazis and their dumb ass ideas is not something i really relish, so it’s taken awhile to get around to it.

Posted by paulms on April 18, 2013 in Uncategorized

4 responses to “Ariosophy and Nazi Mysticism”