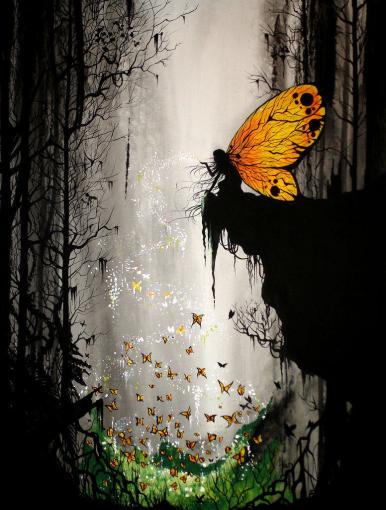 It’s no secret i like Faeries. A lot. I think they get utterly misrepresented as good little new agey pretty things, when in fact faerie lore is kind of creepy. They have a moral ambiguity and an otherness that make them creepy, and some Fae creature are out and out malevolent. Their abductions of humans and especially of human babies are not cool. And yet their otherness, their enclaves deep in the forest, in their mounds, is enthralling.

You know, i should do an album like Fairy Tales of the Lost and Wandering but of nothing but actual Faerie stories, specifically about the Fae. Hell, i could make up some awesome Fae stories.

Huh…. that’s an interesting idea there…

In between the Dieselpunk Opera and the Atompunk Opera next year i could make an album in the vein of Fairy Tales of the Lost and Wandering… huh….

Anyway, before i get sidetracked, today we feature songs that feature fairies. There’s kind of no way to avoid songs where celtic and new agey sound converge, and for some that’s not a bad thing. For me it’s pushing the line, but…. i mean don’t get me wrong, i have a 4 year old and i…. i might be misleading him as to the existence of fairies (there’s a patch nearby we’ve dubbed The Fairy Forest and as far as he knows fairies actually live there and come out at dusk. He asks questions about them and i answer. It’s my version of Santa Claus. We’ll get to the truth when he gets a little older but for now…. i know it’s crazy but let him have a little fantasy and magic in his childhood.) Since he’s only 4 i don’t really desribe the creepy kind, sadly they’re more the new agey kind, don’t worry, as he gets older we’ll darken those faeries up, oh yes we will.

If i did a Faery album i would make it deep and mysterious, atmospheric, yes, but not new agey.Creepy. it’d be creepy and otherworldy. And yet there’d be a trace of celtic in there, just… there’s another direction you could go.

Realm Of The Fairies

Since you can’t get away from the over abundance of new agey faerie songs out there, we might as well start with one that does it right.

You know, i actually like Loreena McKennitt. I would sway about the room with my infant son on my arm playing The Lady Of Shallot. Like, every night for weeks. I’d be amiss to not include one of her faeie songs. This one gets the pick because it’s a rendition of the wonderful William Butler Yeats poem.

You know, i’m starting to think more and about this Faerie album ideaq, because all the music i’m running across online is ALL EXACTLY THE SAME. Seriously. Don’t get me wrong, there’s a lot of people who like this genre and style and i’m not saying you shouldn’t listen to it, i’m just saying… there could be more diversity in Faerie songs. They don’t ALL have to be celtic meets new age.

Innisfree Ceoil: The King Of The Fairies

Ah, Here we go. This is nice! Traditional Irish goes down so much better. It’s a matter of soul. It has more soul

Yeah, you know what? This son rules. It’s so embedded in our psyche we forget it, but listen to it… it’s awesome. It’s beautiful and gentle and yet leagues above the syrupy smaltz that i keep finding on the net. Plus, damn this girl can DANCE. Who can’t use little ballet action in your day?

Oh, damn, Black Sabbath wrote a fairy song! Wow. There is no way i can’t put this on the list. here it is.

Posted by paulms on April 23, 2013 in Uncategorized

← Arcology: City In A Building
New Covers for the New Albion Trilogy Albums →

4 responses to “6 Songs About Fairies”