Several posts ago i featured some lovely pictures of artists who use light as their medium. One of the artists who particularly took my fancy was Bruce Munro, who deserves his own post.

THAT my friends, is The Eden Project in Cornwall, UK a series of biodomes housing plants from acorss the world and boasting the largest greenhouse on the planet. The picture above is Bruce Munro lighting it. The lighting scheme also includes fields of light:

In Wiltshire he built a Sea of CDs using… you guessed it, discarded CDs:

Who the hell knows:

Posted by paulms on October 2, 2011 in Uncategorized

And free associated from Kinetic Art, yesterday’s feature, we arrive at Light Art. So today i make sweet, sweet love to your eyes with these photos. Baby. Oh yeah….

Posted by paulms on September 20, 2011 in Uncategorized

“Rubin, in some way that no one quite understands, is a master, a teacher, what the Japanese call a sensei. What he’s the master of, really, is garbage, kipple, refuse, the sea of cast off goods our century floats on. Gomi no sensei. Master of junk.” -William Gibson

“Kinetic art is art that contains moving parts or depends on motion for its effect. The moving parts are generally powered by wind, a motor or the observer. Kinetic art encompasses a wide variety of overlapping techniques and styles.”

“Do not boast about the tempo of technology. The final, essential questions are not altered by technology. They remain. Even in the most modern airplane you travel forever with yourself-your mood, your misery, your world-weariness. You may be able to measure your blood-pressure more accurately than Albert Magnus did. In photographs, you may depict landscapes more precisely than Aristotle could. The ultimate questions still stand before your soul today, as they always have. Take heed that your flight does not carry you beyond that which is essential, but closer to it.”

“Marque Cornblatt was born in Baltimore, Maryland in 1966 and now lives in San Francisco. He holds an MFA in Conceptual Arts from SFSU; has a diploma in theater technology from the Baltimore School of the Arts and a B.F.A. in film and video production from New York University.

Cornblatt’s robots, machine art and video scuptures have been exhibited at the SF MoMA, San Jose Museum of Art, Orange County Center for Contemporary Art, di Rosa Preserve, Downey Museum of Art, and at galleries throughout California and New York.

A self-described “Promosexual”, Marque has appeared on numerous TV programs and is currently producing and hosting “Gomi Style”, a DIY lifestyle and design series.”

For more of Marque Cornblatt’s work and thought you can go to his website at www.marquecornblatt.com or the Gomi Style blog.

Posted by paulms on September 19, 2011 in Uncategorized

Holy ####! The Most Amazing Sculpist You Will See This Month. This Year Probably.

I could call it steampunk sculpture because he does have a few pieces that are steampunk, but this guy’s work is so flat out amazing why limit ourselves to just showing the steampunk stuff?

This is the piece that caught my attention:

The sculptor’s name is Kris Kuksi.

Wait, check this thing out:

His background? Here: “Born March 2, 1973, in Springfield Missouri and growing up in neighboring Kansas, Kris spent his youth in rural seclusion and isolation along with a blue-collar, working mother, two significantly older brothers, and an absent father. Open country, sparse trees, and alcoholic stepfather, all paving the way for an individual saturated in imagination and introversion. His propensity for the unusual has been a constant since childhood, a lifelong fascination that lent itself to his macabre art later in life. The grotesque to him, as it seemed, was beautiful.”

I couldn’t possibly write anything better than that.  Wait, more awesomeness:

“In personal reflection, Kris feels that in the world today much of mankind is oftentimes frivolous and fragile, being driven primarily by greed and materialism. He hopes that his art exposes the fallacies of Man, unveiling a new level of awareness to the viewer. His work has received several awards and prizes (it bloody well should!) and has been featured in over 100 exhibitions in galleries and museums worldwide including the Smithsonian’s National Portrait Gallery.”

This one is a personal favorite. ChurchTank:

Many more immensely awesome sculptures can be found at Mr. Kuksi’s website, kuksi.com.

Posted by paulms on April 10, 2011 in Uncategorized

Today we feature the wonderful work of Belgian sculptor Stephane Halleux who, as the title of the post should clue you in,  makes little steampunky robots and dudes out of leather,metal, wood and recycled materials which he sews and bangs together. These things are amazing and today’s post is very difficult in that there’s so many amazing pics to show, i’m not sure which to choose. 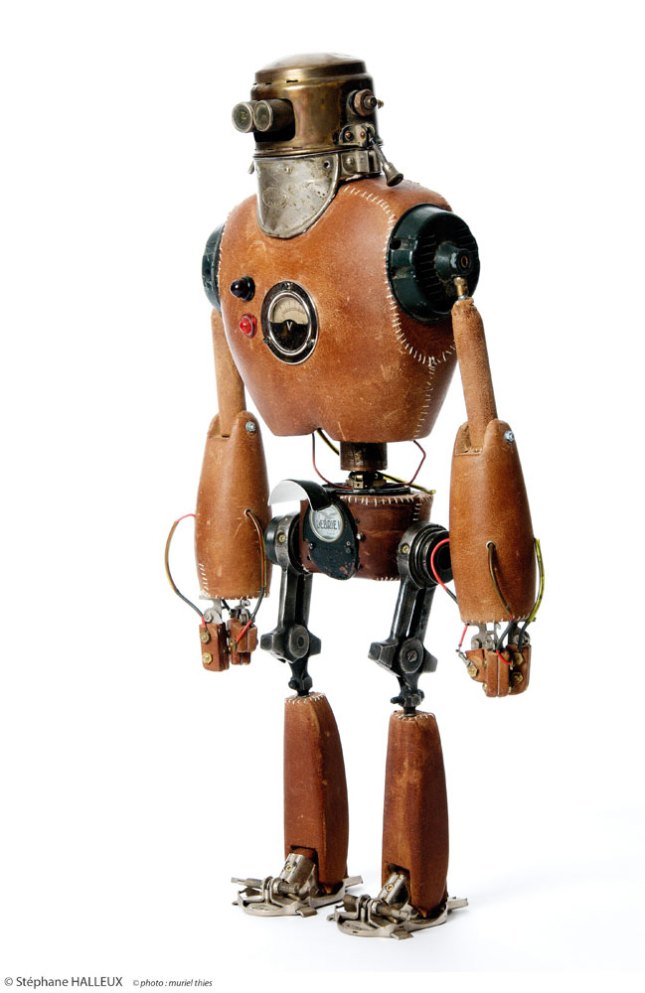 So… Stephane Halleux. He worked for a long time as an illustrator, particularly for european comic books, and eventually found an art gallery in Luxembourg who enabled him to devote his full time to sculpting. He lives in French speaking Belgium (note to fellow Americans, fun factoid: you know French fries aren’t French and never were? Yeah, see, in WWII when the Americans landed in Belgium, because the Belgians spoke French the soldiers assumed they were in France. And since Belgians LOVE and invented the pom fritte, the Americans assumed they were a French treat and called them French fries. I’m sure Mr. Halleux would be delighted to know that his bio has provided an opportunity for cross cultural education) with his partner and 2 children.

Lastly, it should be mentioned that the animators at ZEILT Productions decided they wanted to make an animated short based on Stephane’s character designs called Mr. Hublot. It’s currently in preproduction, but there is a test video where they worked out design and movement for one of the characters (to be specific, Mr. Hublot).

For more of Stephane Halleux’s amazing creations check out his very nice and sleek flash filled site at stephanehalleux.com

Posted by paulms on February 20, 2011 in Uncategorized