So we’re going have one more paintings/art movement day.

Carlos Schwabe, The Death of the Grave Digger

From 1885 to 1910, while the Aesthetics and the Decadents were bursting with life, Symbolism was also in full swing. In fact, there isn’t much of a line between these genres. You can find many names under all three categories, although Symbolism was centered more in France, Belgium and Russia and does has some particular characteristics.

They were about the mystical and the visionary. 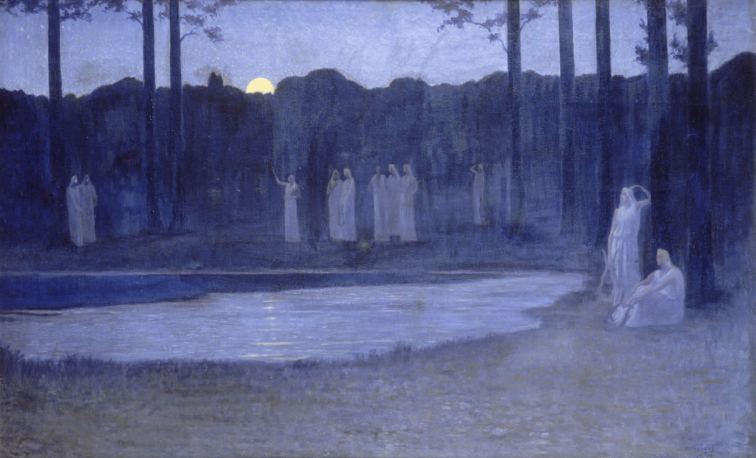 Alphonse Osbert, The Songs of the Night

One cannot of course have a movement without a manifesto. “In this art, scenes from nature, human activities, and all other real world phenomena will not be described for their own sake; here, they are perceptible surfaces created to represent their esoteric affinities with the primordial Ideals“

Boecklin, Isle of the Dead The Symbolists included poets too, such as T.S. Eliot, Ezra Pound, Gustave Kahn, Baudelaire (who was involved with all of these movements) and Rimbaud.

The importance of these three entwining movement, Aesthetic, Decadent and Symbolism, aside from their own beauty in and of themselves, is that they formed the launch pad of what would become 20th century abstraction. It is the Aesthetic trinity that crossed the barrier which led to modern art. If you take Impressionism and combine it with the Aesthetic trinity (and get drunk) you can see how Kandinsky, Klee, Picasso, Matisse, Franz Marc and modern art in general was the next logical step forward.

Vasily Polenov, Christ and the Sinner

Posted by paulms on January 19, 2012 in Uncategorized

The Decadent Movement: The Great Grandparent of Goth

Following what occured after the PreRaphaelites leads us to Aestheticism, which i have already covered. So let us delve into a subsection of the aesthetic movement, the Decadents.

Like Aestheticism’s battle cry: ‘Art for art’s sake!’ the Decadents, as an offshoot  of Aestheticsm took this break from the tradition of using art to convey moral messages and classical themes and instead went even further. As a movement of both writers and artists they rejoiced in a self indulgent approach that ignored even nature in it’s self obsessiveness and cultivated an attitude of anti virtue, anti civilization and sometimes love of the macabre.

Edgar Allen Poe for instance was a darling of the Decadents.

An example of a literary theme the Decadents invented which has evolved and is still explored today is the notion of the person who disdains the world around them and retreats into a self created inner world. This was the subject of the book Against Nature, by Joris-Karl Huysmans. Published in 1884 it was an unbridled sensation, attacked savagely by critics but adored and championed by a younger generation of writers and artists.

Charles Baudelaire, the poet and assayist was another inspiratrion and darling of the Decadent movement.”What do I care if you are good?Be beautiful! and be sad!”  Emo, folks. Pure emo.  “All that is beautiful and noble is the result of reason and calculation. Crime, the taste for which the human animal draws from the womb of his mother, is natural in its origins. Virtue, on the contrary, is artificial and supernatural, since gods and prophets were necessary in every epoch and every nation to teach virtue . . . the good is always the product of some art.” That’s goth.

The Yellow Book, the first issue

The literary center of the movement was the infamous Yellow Book. The Yellow Book was a quarterly literary journal published from 1894 to 1897.

Henry James, H.G. Wells and Yeats were among its many contributors. It was yellow because in France, books with lewd content were covered with yellow to “alert the reader to their lascivious content”. The yellow book deliberately played off this trope, and indeed it caused an immense ruckus.

The London Times decried it as “repulsive and insolent” and the Westminster Gazette clamored for an “act of Parliament to make this kind of thing illegal.” In The Picture of Dorian Grey by Oscar Wilde (a noted decadent himself but who was never published in the Yellow Book), Dorian Grey is sent a copy of a Yellow Book to amuse him after the suicide of his first love.

My Gd this is SO goth.

The Yellow Book, aside from defining a movement and an amazingly high literary standard is also notable in that it had no qualms about publishing women writers.

While Lord Byron and the Romatics had perfected the art of drunken partying, the decadents brought us into the modern age by embracing drugs. Hashish, opium and absinthe (back when it still had wormwood and you could trip off of it) were consumed en masse. 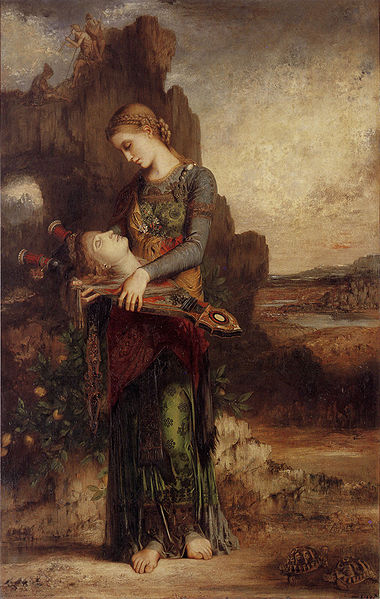 Gustave Moreau, Thracian Girl Carrying the Head of Orpheus on His Lyre

The Decadents loved Orpheus but they positively obsessed over Salome. 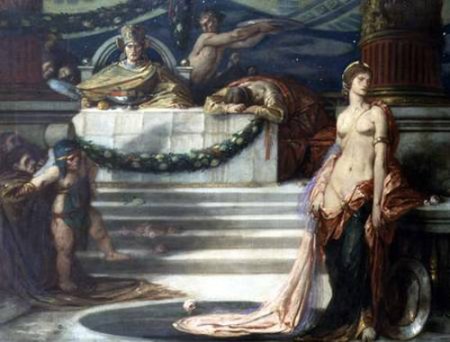 And of course Oscar Wilde’s Salome, teh play for which Aubrey Beardsley did a series of famous prints:

Beardsley, The Toilet of Salome I, from Salome

Other decadent paintings (although it is very difficult to seperate “decadent”painting from “aesthetic”painting as there was less of a line in the sand as there was for the literary movement: 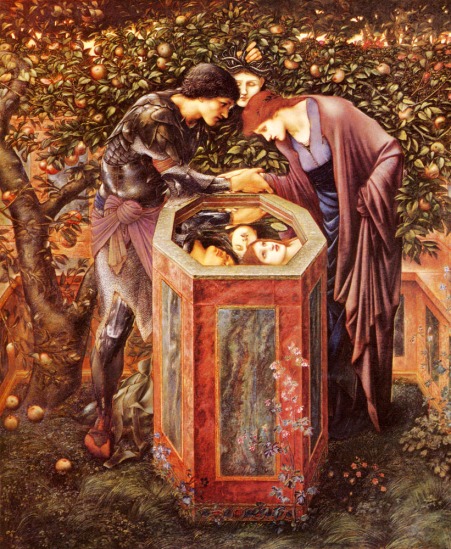 Simeon Solomon, The Sleepers and the One who Watcheth

Benjamin Constant, Favorite of the Emir

Posted by paulms on January 18, 2012 in Uncategorized

Sir Joshua Reynolds was the first President of Britain’s Royal Arts Academy in the mid 1700s. He trumpeted a style known as Grand Style or History Painting, in which he contended that painters should perceive their subjects through generalization and idealization, rather than by the careful copy of nature.

The PreRaphaelites HATED this and this was what they rebelled against.

In 1848 a group of artists and poets who hated Sir Joshua and this very idea got together and declared themselves the Pre-Raphaelite Brotherhood. They contended that the obsession with “classical” poses, classicism in general, concept over aesthetic,  and formality and starkness over richness of detail and colorful exuberance had caused art to… well, suck.

Basically, they contended that everything since Raphael had gone downhill, so they were going back to Pre-Raphael ideals of painting.

They felt that the Middle Ages possessed a spirit and grace that had been lost to modern man and they vowed to recapture that spirit.

In a nutshell, these were their 4 declarations:

As pretty as they seem nowadays, in the 1850s this was seriously innovative stuff and both the public and the critics were truly shocked and the PRB was lambasted. Reviews were scorching. It took hte most revered aesthetician of the day, John Ruskin to give his approval before the populace starting calming down and accepted the new style. John Everett Millais,Christ In The House Of His Parents

The Pre-Raphaelite Brotherhood began by putting the letters PRB on their paintings, long before anyone knew what it meant.

“More than any of the original Brotherhood could have predicted, the Pre-Raphaelite label turned out to be a canny piece of marketing. The aura of mystery surrounding the initials “PRB” fostered an explanation industry: commentaries, reviews, and evaluations that set out to teach the uninitiated just what Pre-Raphaelitism was. As early as the 1850s, this apparatus gave the Pre-Raphaelites a particular aura of intellectual rigor and interest, and it helps to explain how a rather small group of paintings and painters came to acquire such an enormous, unlikely influence. ” – Andrew Elfenbein

Posted by paulms on January 16, 2012 in Uncategorized