Here’s a little experiement. Quick, picture music to a noir film in your head.

Everyone i ask replies the same, the exact same. The music is slow, with an acoustic bass, maybe an echoey trumpet, sparse, maybe some lightly brushing drums.

Everyone pictures the same thing. And if you’re going to do a piece of music that will signify film noir that is basically what you should do if you want the image to get across. However, here’s what’s interesting: that is NOT the actual music in any classic noir film. At all. Ever.

Allow me to demonstrate:

Classic film noir uses a hollywod orchestra. Lots of cheesy strings. Lots of orchestral tension motifs, but NO small, lonely jazz bands. NONE. EVER. OKay, sure they get used for RETRO noir films, that is films made after 1958 when class film noir officially ended. So some 70s movie trying to be noir might use the small jazz band, but what’s fascinating is that everyone pictures the exact same motif for the classic films and this motif DOES NOT ACTUALLY EXIST.

Sure, jazz WAS the music of the day. In the 40s jazz was king. But movie soundtracks used orchestra and a particular movie orchestra sound and thus this was never heard in an actual classic noir film:

See, that last vid is exactly what we all picture and yet at some point post era it was retrofitted to the genre. Isn’t that really interesting?

Posted by paulms on June 19, 2012 in Uncategorized

Sorry for lack of posts, but i’m working really hard at the moment and haven’t had time to post. However, i’m gonna take a moment and continue with the fiolm noir bent i’m on. Can’t come up with a big post, but here’s an awesome musical clip from a 1944 film Phantom Lady. Ah, if only i could recreate music like this… but there’s no way. This is something only live music can do.

Posted by paulms on June 18, 2012 in Uncategorized

Noir Vs. The Hard Boiled Detective 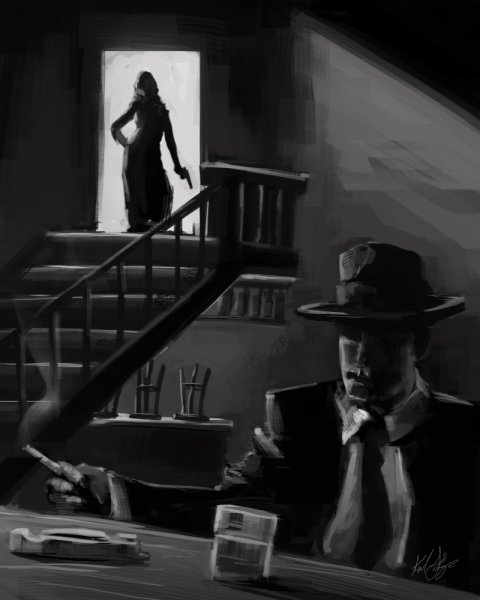 For a… thing i’m working on (you’ll discover it soon enough) i have begun a small self course in Noir, both book and film. Since it’s a wonderful and fun genre and a potential central tenant to dieselpunk we’ll be discussing it here on and off for a little while.

As you may know, noir began in literature in the late 1930s but became a full fledged phenomenon in the early 40s, as film noir emerged. The movie that critics point to which truly fired the first shot in the film noir movement was The Maltese Falcon, which set so many standards for the next 17 years it is still discussed and enjoyed today as thoroughly as it ever was. Truly it’s great movie and if you haven’t watched it GO WATCH IT.

Film noir slowed to an end, officially at least around 1958. It should be noted that the notion of the film noir genre and the films that embraced the style and aesthetics are categorized NOW as film noir, but back then no such label existed. It wasn’t until some years later that the French, in discussing these films came up with the name. Never the less these movies were all clearly playing with certain styles and notions. James Ellroy, a writer and in my opinion the greatest living writer of crime fiction in the world today (known for LA Confidential and The Black Dahlia, but pick up White Jazz or American Tabloid if you really want to be blown away) and Otto Penzler who edited a recent Noir Fiction anthology make a convincing case that noir is often mislabelled and misunderstood as being synonymous with hard boiled detectives and in fact it is not.

When you think of noir and those black and white detectives walking the streets of the 1940s and 50s you may be missing some key distinctions that separate noir from detective stories.

In the world of the hard boiled detective, the detective is a tough bad ass who will bend whatever rules he needs to see justice done. The bend or even break the law in order that a higher justice be served. This trope continues today undiminished. However, this is NOT noir. The detective just mentioned is a type of knight and rough around the edges, he is never the less a champion of justice. The cases may be messy, but at the end, their self imposed moral slate is clean.

Noir is defined by a distinct break with this idea. Hence the existentialist egde. In noir, the protagonist such as detective is AMMORAL. Their motives are questionable. They do stupid things for the wrong women, or serve self interest over true justice or serve justice as a side effect. As noir really got going, the protagonists became more and more flawed and doomed by their flaws. The tales become outright Tragedies. The character in the film noir movie develops a scheme, usually out of lust for exactly the wrong women and the movie shows their doom play out. There can be no happy ending and their slate will never be clean.

Double Indemnity, one of the great noir films encapsulates this perfectly.

Noir is dark. The look of the films is heavily influenced by the German Expressionist film movement which we have covered here in length and also owes to the expressionists an existential underpinning. The endings are not really all that happy and in literature usually utterly tragic. In film a few more consolations are made since a film is often pushed by the studio to have SOME type of happy ending and in fact if the rest of the film fits noir standards you can’t dismiss it just because the ending isn’t depressing enough. Although the ending SHOULDN’T be utterly happy. It must be at least somewhat ambiguous.

A modern, post noir example would be Blade Runner, which is an utterly noir film, and technically sci-fi noir. The film was pushed by the studio to have a happier ending, which it did originally, although in later director’s cuts the ending was returned to being ambiguous.

Some noir afficianados will argue over whether Sam Spade of The Maltese Falcon is truly noir (much like how punks would argue whether something was punk enough) as he blurs the lines. However, not only does the film fire the first true shot in the movement (which nods to M and Freaks which set the stage) but Sam Spade is noticeably and significantly morally blurred and the ending is barely happy.

There must be a femme fatal. The female lead must also be of unscrupulous morals and will use her sexuality and charm to manipulate the male protagonist into corruption. Film noir made the femme fatale into an art form which still lingers today. A larger discussion of misogyny in noir is a topic we will tackle another day (although we shall tackle it as there’s a lot to think about here.) Many femme fatales exist in detective films as well as noir, causing more blurred lines in between, but it must be noted: the female interest must be morally questionable, just like the male and must drive him to do ammoral acts. Simply sexy is not enough. Wholesome is out of the question. The two of them together should be the perfect storm.

True noir it is argued is a tale of a corrupt character, the sexual stimuli that activates them and the fall that awaits them. In literature this distinction is more pronounced as stories were not required to have the type of endings that movies were and still are under great pressure to have.

We will discuss some other aspect of film noir in detail tomorrow (probably) but today i simply wanted to reiterate the case that Otto Penzler and James Ellroy make, which is it is a fallacy to assume that gritty detectives of the 40s and 50s are automatically noir, when they in fact often aren’t. If they have a strong personal moral sense they do not compromise, than they are not noir, regardless of how many shadows they run around in.

Posted by paulms on June 15, 2012 in Uncategorized