Rendering based on Antonio Sant’Elia

The first wave of Futurists, the Italians from 1909 until WWI sparked a lot of fires with their vision of bold, vehemently modern, machine and industry industry loving, confrontationally daring art. One such fire was in the field of architecture.

Naturally there had to be a manifesto not just on Futurism (as we saw yesterday) but specifically on Futurist Architecture, which Futurism’s founder Filippo Marinetti also had a strong hand in writing along with Antonio Sant’Elia. Truth be told, Marinetti LOVED writing manifestos. He wrote a pile of them for various Futurist endeavors.

However, far more important to the birth of Futurist Architecture was the aforementioned Antonio Sant’Elia, a builder who became a designer whose vision of architecture encompassed and inspired Futurist ideals. Let us take a brief look at part of that initial manifesto:

“No architecture has existed since 1700. A moronic mixture of the most various stylistic elements used to mask the skeletons of modern houses is called modern architecture. The new beauty of cement and iron are profaned by the superimposition of motley decorative incrustations that cannot be justified either by constructive necessity or by our (modern) taste, and whose origins are in Egyptian, Indian or Byzantine antiquity and in that idiotic flowering of stupidity and impotence that took the name of neoclassicism.

These architectonic prostitutions are welcomed in Italy, and rapacious alien ineptitude is passed off as talented invention and as extremely up-to-date architecture. Young Italian architects (those who borrow originality from clandestine and compulsive devouring of art journals) flaunt their talents in the new quarters of our towns, where a hilarious salad of little ogival columns, seventeenth-century foliation, Gothic pointed arches, Egyptian pilasters, rococo scrolls, fifteenth-century cherubs, swollen caryatids, take the place of style in all seriousness, and presumptuously put on monumental airs.They persevere obstinately with the rules of Vitruvius, Vignola and Sansovino plus gleanings from any published scrap of information on German architecture that happens to be at hand. Using these, they continue to stamp the image of imbecility on our cities, our cities which should be the immediate and faithful projection of ourselves.

And so this expressive and synthetic art has become in their hands a vacuous stylistic exercise, a jumble of ill-mixed formulae to disguise a run-of-the-mill traditionalist box of bricks and stone as a modern building. As if we who are accumulators and generators of movement, with all our added mechanical limbs, with all the noise and speed of our life, could live in streets built for the needs of men four, five or six centuries ago.”

Alas, Sant’Elia did not actually live to see many of his designs become buildings. He was one of the many prominent Futurists who went marching heartily into the jaws of WWI never to march out.

However the banner of Futurist Architecture was picked up and carried onwards by not only successive designers but naturally, successive manifestos. There were at least three more of them, one in 1920, another in 1931 and still another in 1934.

The 1920 manifesto was written by Virgilio Marchi. Here is an example of his design:

Futurism eventually became associated with fascism and the Eastern Bloc. This is no accident. Remember how Marinetti loved to write manifestos? Well, another of his babies is the 1919 Fascist Manifesto. He had strong ties to the Italian Fascist party although his relationship with the Italian Fascists could be stormy. Many prominent fascist architects were indeed futurists, notably among them Angiolo Mazzoni

Futurism never became the official architecture of Mussolini’s Fascist Italy, despite Marinetti’s never ending attempts, mostly because “Mussolini was personally uninterested in art and chose to give patronage to numerous styles in order to keep artists loyal to the regime”, but there is no question that it dominated Fascist Italy and had great impact upon the Soviet bloc and Balkans after WWII. 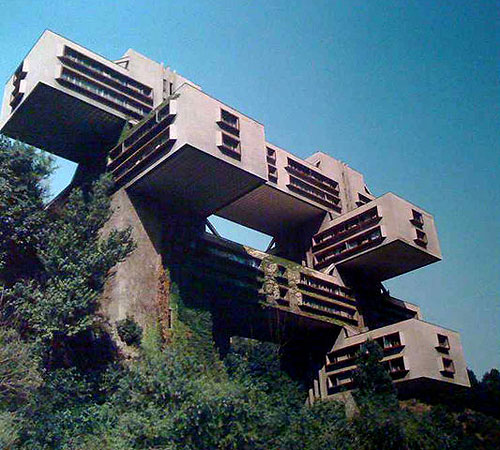 In the West, Futurism evolved. It became Art Deco. Later, the Googie movement was an evolution of Futurism, as was space age and neo futurism.  It continues to evolve today, although in a much smoother, more lush way:

Posted by paulms on August 19, 2012 in Uncategorized