We shall end our little 4 part series of Freemasonry with some pictures of Masonic temples.

During the 1700s as Freemasonry became a new type of social club centered around symbolic spiritual morality with less and less ties to its past as a medieval guild, Freemasons would gather in taverns, homes or public halls. As the years went by and their meetings became more and more elaborate, requiring greater and greater set up and tear down time, it began to look like good idea to build a dedicated meeting hall.

Considering also that the Craft centers around an obsession with architecture and its tools i would also assume this was inevitable.

Building a building takes a lot of money of course, but by the later 1700s Freemasonry was seeing more and more higher class members and in 1765 the very first Masonic Temple was built in Marseille, France. In 1777 the  first temple was built in London: Freemason’s Hall. With this, the Temple room in which Masonic rituals take place and called such after the Temple of Solomon around which all Freemason lore centers, became not just a symbolic place where Masons met, but a literal, physical one.

During the 1800s the trend continued. Often a group of Lodges would all pitch in to build or buy a building together and in other smaller ares where money was more of an issue Masons would buy old churches, schools or even homes of community founders, which they would then convert into lodge meeting spaces.

Despite the different buildings and scales of finance, the actual temple room remains rather consistant, however, as you can see for yourself from the following examples.

I would point out that most temple rooms these days are smaller and much lass ornate, as Freemasonry struggles. It still has many, many members and Lodges worldwide, but the days when men would go to weekly lodge meetings of whatever social club they were part of are decades past.

Old sit coms and even cartoons treat lodge membership matter of factly as a normal part of a man’s life. The Honeymooners, Happy Days, the Flintstones, the Andy Griffith Show all come from a time or portray a time when social club were normal. After the 1950s however, this has died out rapidly, although from the 18th to the first half of the 20th century social clubs were practically a universal passtime among males. Furthermore from the 1800s on, most social clubs were modeled to some degree or another after Freemasonry, which was the towering giant of the social club landscape for practically 200 years, although few other social clubs were as serious or in depth. 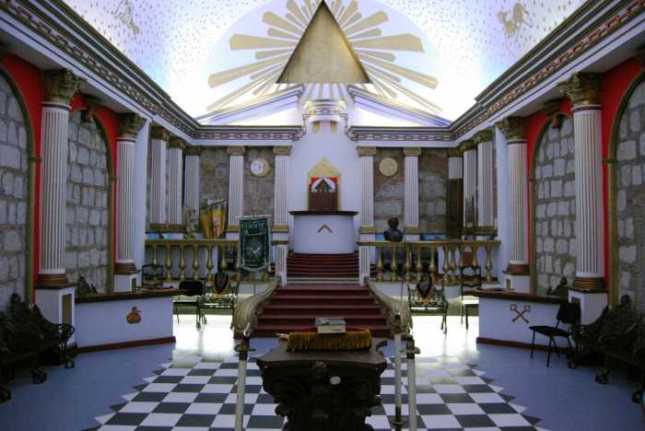 And with this ends our forray into Freemasonry. There are scads of interesting stories and yes, some real conspiracy doozies, although i must stress most outlandish tales are pure hystericism by groups hostile and paranoid towards Masonry (evangelicals for instance). I would rather tell interesting tales as one off blog pieces in the future rather than extend this series beyond 4 Parts.