In continuing our recent discussion about the Penny Dreadfuls that populated the Victorian era, it’s worth pointing out that almost all of the popular characters who once defined the era, Spring Heeled Jack, Varney the Vampire, Dick Turpin, Ching Ching, Jack Harkaway… they’re all gone. Sure some band or clever writer might make an obscure allusion to one of those bygone personalities, but as far as popular imagination and relevance is concerned all are dead.

Except one notable exception.

Sweeney Todd, one of the most popular Penny Dreadful characters, a violent, horrific barber who slit mens’ throat while they sat in his barber chair then dumped their bodies in his basement where his neighbor Mrs. Lovett would then mince them and use them as meat in her pies, THIS character is alive and well and dare i say beloved today.

His tale has been told in plays, several movies all the way from the silent era to the 2007 film by Tim Burton (which i really liked), he’s been in a Tony award winning musical by the great Stephen Sondheim, hell he has been in a BALLET. Yes, in 1959 there was Sweeny Todd The Ballet. Which, for the record, is an utterly awesome idea. Black Swan would have been even cooler if the main character was trying to really… you know, REALLY get into the lead role of Sweeney Todd.

Why? Who knows. He’s a great villain.

Originally appearing early in the penny dreadful days of 1846 and written byJames Malcolm Rymer and Thomas Peckett Prest,  teh story was called A String Of Pearls and told in 18 parts. A String Of Pearls involved the mystery of a missing string of pearls expected by Miss Joanna Oakley. Eventually it all leads to Sweeney Todd murdering his patrons for money and Joanna not only finds her pearls but her missing fiance who Sweeney has imprisoned in the basement cooking up the pies for Mrs. Lovett’s pie shop against his will.

Worth mentioning is the fact that unlike all the other anti-heroes so popular at the time who had some saving grace, Sweeney Todd had none. Those familiar with the Sondheim work will know a backstory that did not exist at the time. Sweeney Todd was not out for revenge. He was not wronged. He was a demonic killer who did it for the money. He was the Freddy Kruger of the era. There was no motive beyond simply being bad to the bone.

In 1847, at Hoxton’s Britannia Theatre, this tale from the dreafuls was put up as a melodrama and was quite successful.  From here on in  the character never really died. Two films in the 1920s, another in the 30s and several radio adaptions in the 1940s kept Sweeney Todd alive. Sweeney and Lovett became lovers in some. In a 1946 Sherlock Holmes radio adaption Sweeney was actually sleepwalking when he did it. In a 1970 TV adaption he was insane instead of evil.

Finally, in 1973 playwright Christopher Bond gives us the modern version. Todd becomes wronged, out for revenge, sympathetic instead of purely a boogie man like force of murder. It is the Bond story which Sondheim used to make his 1979 Tony award winning musical, starring Len Cariou and Angela Lansbury. 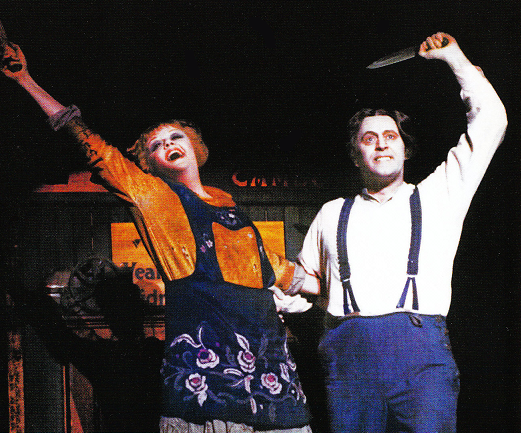 And thus Todd remains alive and well, happily… or not so happily murdering poor stubbled customers in his specially designed barber chair of death long into the forseeable future. (The barber chair is special because it hflips upside down and deposits the customers into a hole in the floor where they fall to the dark underground tunnel below. In the penny dreadful version they usually dies by cracking their head open due to the fall and Sweeney would only then go down with his razor to “polish them off”. In the 1847 stage version the phrase “I’ll polish him off” became a catch phrase, the “I’ll be back” of the era.)

Thus we have attended the tale.

I end now with a comparison between the original stage version and the film version. One of the reasons i like the film is because of its lower key you can really appreciate the music and melodies in a marvelously well recorded soundtrack. However, one must appreciate that the stage version throws the high emotion from figures on a stage across an entire theater tot eh very back row which was its original intent. Not to mention you can hear Johnny Depp trying as where the theater guy sounds like he eats musical murder sausages for breakfast washed down with a cup of his enemies’s blood before really feeling like getting up and facing the day.

And just because it has Neil Patrick Harris:

Posted by paulms on March 7, 2012 in Uncategorized

One response to “Sweeney Todd”