RSS
← The Foxtrot
Gazing Past The Dream: Maya Deren →

Morella & The Wheels Of If 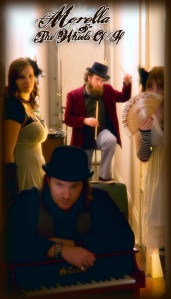 “”If you don’t like dramatic, gothic tales of madness and intrigue set to carnival waltzes all fueled by operatic female vocals and great piano playing, then move along. But if you do, then step right up to The Wheels of If!”
-Offbeat

The Wheels Of If are a steampunk band originating out of New Orleans. Led by Aeryk and Laura Laws they feature piano and drum led victorians style muscial landscapes with two female singers.

I am going to assume the name Morella is in homage to the classic steampunk film The Mysterious Explorations of Jasper Morella.  Hell one of the characters in the opera is named Jasper in homage to the same short.

A sampling of the band’s music can be perused here:

Morella & The Wheels Of If | Shipwrecked | CD Baby.

The band uses film, video and photgraphy to accentuate their live shows. They also sometimes prepare absynthe on stage and pass it around to the audience. You know, flaming spoon and all that. It’s good fun. nott eh same witihout teh wormwood but lord that stuff can get you 3 ways til next sunday…

For more information and stuff to check out, visit the band’s website at http://www.morellamusic.com/fr_morellamanor.cfm

Posted by paulms on July 11, 2011 in Uncategorized

← The Foxtrot
Gazing Past The Dream: Maya Deren →